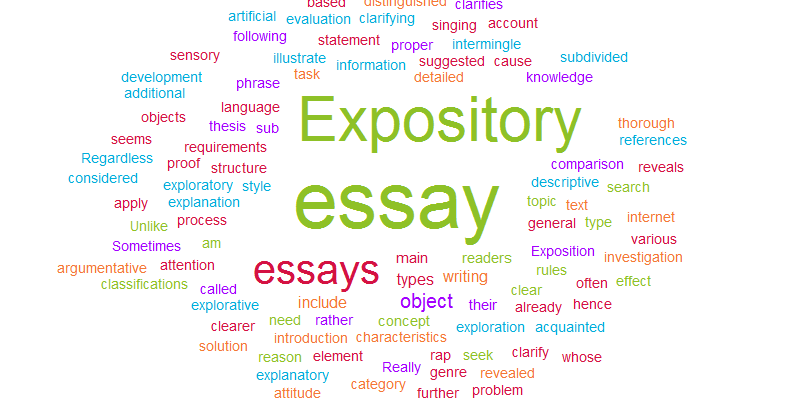 Expository essays, as a genre, seek to illustrate and clarify some object so that it will become clearer to the readers. That is, you are already acquainted with a topic, have a general concept of it, but, for some reason, need a more detailed knowledge.

In a way, this kind of essay is close to explanation of a topic hence to the explanatory essay (which is another proof that essay types often intermingle). Exposition may include investigation of the object using various means like, for example, an internet search for references to the rap style of singing. Another way of clarifying information about an object is its thorough evaluation that reveals a more detailed picture of the same object.

Sometimes the category of expository essays is further subdivided into several sub-types. Usually the following sub-types are distinguished: descriptive essay a detailed account of the object based on sensory information), process essays (clarifies a process in its development), and comparison essays (where additional information is revealed through comparison of two or more objects). In some classifications, among the expository essays are also cause-and-effect essays and problem-solution essays, which, however seems rather artificial.

General characteristics of the expository essays

Regardless the sub-type, it is considered that, to all expository essays, a few requirements should apply.

Unlike argumentative essays whose characteristics include a clear attitude in relation of the essay topic, in the essays of the expository group, neutral tone is usually kept. That is actually quite natural, because explanation, exposition or description themselves as processes normally do not include any conflict of attitudes.

For the same reasons, the language in expository essays tends to be rather normative than emotional, and, at the same time, concise and clear. The task of the essay writer is to create a well developed concept of the investigated subject. In order to accomplish that task, the most efficient way is to use all descriptive means in a solid and strictly logical framework.

The structure and writing rules for en expository essay

As is well known, expository essays (practically all their types) enjoy a special liking of university professors. So, I am a student and I am tasked with an expository essay. How do I write my essay?

There are certain structure and rules suggested for essay writers wishing to compile a proper expository text.

The requirements concerning the structure of an exploratory essay (similarly to the above mentioned requirements on the language and arguments) serve the same purpose of conveying a comprehensive image of the studied object.

For a proper exploratory essay, it is useful to formulate a clear cut thesis statement in the introductive part.

It is usually suggested to place in it a phrase or two that will attract the readers’ attention (“attention grabbers”). That grabber works pretty like a hook that makes the reader remain with you until the final conclusion. Besides, it would be fine if

As to the size, with explorative text, it may be within a large range from one to several paragraphs.

Common rules also require to include in the introduction a so called thesis statement, which formulates the main concept of the work. However, for exploratory essays, this element does not look as important as for other essay types. Really helpful for the success of your exploration would be to include in the introduction a phrase or two that ease the transition to the main part.

Your story will be smooth, convincing and cool if its parts, while completing their particular functions, will easily follow each other from beginning to end like an uninterrupted tale. Then the impression will be stronger and the exploration deeper.

The main part is where you involve all your expressive powers to really expose the object so the readers can develop their concept of it and find it much more attractive and exiting that they thought before. The means in your disposal are hardly limited. In an explorative essay, the style may be especially flexible. Fill your story with all your narrative skills and you will succeed.

In the conclusive section, you may review the main points. Also, try to invent what is called a takeaway element that readers keep in their minds after reading your story.