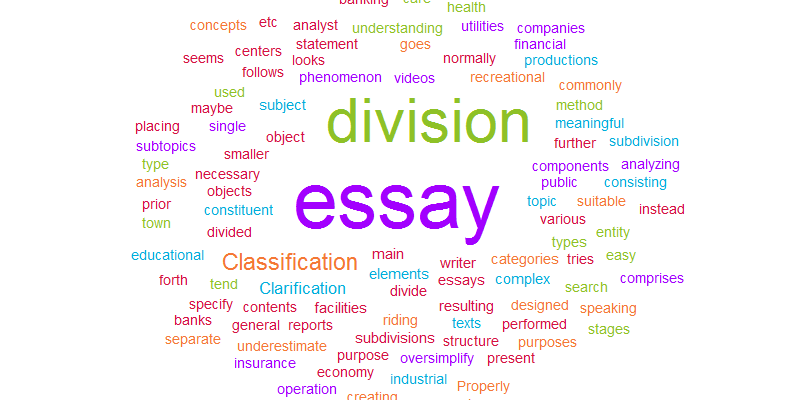 Classification and division essays are those designed to divide a whole into various smaller elements and then place the resulting elements into several categories. Usually, the search for a suitable topic for a division essay looks as follows: The writer tries to find a subject, which the general public tend to oversimplify or underestimate. Then, in the course of the essay, it is necessary to present the object as a complex entity consisting of important and meaningful components.

Such a method is commonly used for different purposes one of which is subdivision of a large and complex topic into various subtopics (and maybe even smaller categories) for easy analysis. For example, prior to analyzing a town’s economy, you may divide it into industrial productions, financial facilities, recreational facilities, public utilities objects, health care centers, educational facilities and so forth. Then, in the banking facilities, the analyst may specify banks, insurance companies etc. as further subdivisions of the subject.

Properly speaking, the whole operation comprises two main stages. First, we divide the whole, and then we “accommodate” the resulting elements by creating the subdivisions and placing the elements into them. Alternatively, in some concepts, instead of one classification and division essay type, there are two separate categories, that is, classification essay and division essay. However, that approach seems to be questionable. Indeed, normally any division is followed by a specification of the resulting constituent parts of the divided whole.

It’s no hard to find parallels of such texts in our everyday practice. One example in journalists’ reports on previously known objects like ancient monuments where a bunch of new properties is discovered making the seemingly well known object shine with new shades. Actually, we watch such videos quite regularly. An obvious difference is that usually it is just videos, not texts, but the contents are very similar to textual division essays. (True, however, that such video reports by their contents are also close to other types of essays like expository ones, which again demonstrates a very conventional character of any essay classification).

A correct example of a division and classification essay is an account of the types of horseback riding in modern times. In such an essay, the writer can analyze such types of the phenomenon as sport riding (with its further subdivisions), recreational riding, and probably some remaining forms of more practical purpose of riding, including mounted police.

Yes, another example may serve practically any manual that goes together with a gadget or more or less complex in use technical appliance. Here too, the object is divided in constituent parts, both physically and functionally; and then each part’s purpose is revealed giving the user necessary skills how to handle the stuff. And again the division goes here together with exploration making it sometimes difficult to decide which essay group such a text should belong to.

The structure and features of the main components

Are there any hints able to help me write my essay? Here are a few useful suggestions how to organize the essay structure specially for non-professional essay writers.

The introduction in a division and classification essay normally explains the readers why it really matters to perform the division/classification as you do in your paper. That is, how do these operations improve the understanding of the subject matter? In the concentrated form, that idea needs to be formulated in your thesis statement.

In the main part, it would be ideal to devote each paragraph to one single division/category. In the end of the main section, the essay writer may try to place a statement that unites all the divisions/ comparisons performed in the paper with one single idea.

And the conclusion may be rather flexible. It is only important to emphasize the advisability of the above division/classification performed in the essay in terms of improved understanding of the phenomenon.